Bullying: A world without violence 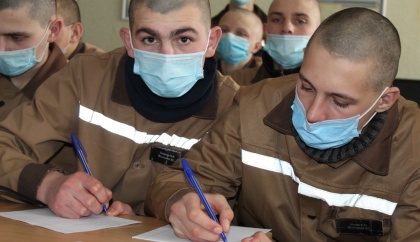 Both the aggressors and the victims are harmed by bullying. They experience emotional problems and are unable to build relationships with people. Children need support from adults to develop their communication skills, and not just at school. The participants of the Docudays UA Film Club at the Kremenchuk Educational Colony discussed how to do this.

A talk hour on Bullying: A world without violence was organized for the boys. The tutor told them that bullying is an urgent problem today, because it is aggressive and extremely intolerant behavior by one child or group of children against another child, accompanied by constant physical and psychological influence. In the course of the discussion, the participants defined the key signs of bullying: intimidation, beating, false rumors, mocking, stalking, name calling, ridicule, publishing personal information and photos.

“Both students and teachers themselves can be to blame for bullying. At my school, the adults never paid attention to bullying between the students. We didn’t even know who to ask for help,” believes Bohdan.

The children watched a documentary from the DOCU/CLUB collection, Bully by Lee Hirsch. The filmmaker demonstrates the astonishing statistics of bullying at a human scale, offering an intimate, fearless perspective at how bullying has affected the lives of five children and their families.

The film documents the responses of teachers and administrators to aggressive behaviours that defy “kids will be kids” clichés, and it captures a growing movement among parents and youths to change how bullying is handled in schools, in communities and in society as a whole.

“In my opinion, work needs to be done with adults as well as children. Parents should be a significant factor in preventing bullying. They should be interested in whom their children are friends with at school, how their day goes, what social networks they hang out on and whom they talk to,” deliberates Serhiy after watching the film.

After the screening, the audience tried to come up with their own titles for the film and quoted the lines which they liked the most. They considered life situations in which they had to determine which situation shows a conflict, and which demonstrates bullying.

A practical class on analyzing situations was organized for the participants, in which the boys developed their skills in distinguishing between types of violence, the aggressor and the victim of a violent situation.“You know, I realized that no matter how much you try to explain the horrible and negative consequences of bullying to kids, it won’t be as effective until children themselves start talking about it,” says Maksym.

The meeting ended with a famous parable titled Everything Leaves a Trace, and with making a large banner reading, “We support tolerance!” During the discussion, the participants came to the conclusion that whether we have the rule of law or we accept violations of our rights depends on everyone personally, everyone should think about what they should do when they witness bullying and conflicts.

Photo: From the archive of the Kremenchuk Educational Colony