MEET THE FINALISTS OF THE BEST SCRIPT COMPETITION 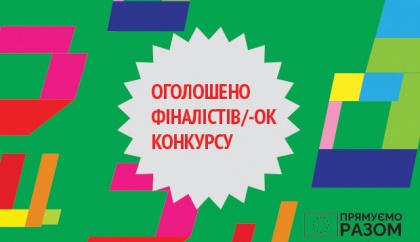 In May, we announced a 'Best Script for Human Rights Educational Events' competition so that film club moderators could share with their audience involvement techniques, best practices, and experiences. The participants had to choose one film from the list and develop a discussion for one of the target audiences: pupils; students; adults; employees of State penitentiary service of Ukraine; convicts and individuals who are placed on probation.
The 'Best Script for Human Rights Educational Events'  competition, which was announced for the film clubs moderators, lasted for a month. An expert jury consisted of representatives of the Docudays UA International Human Rights Documentary Film Festival, and the Ukrainian Helsinki Human Rights Union (UHHRU) carefully reviewed all 48 scripts submitted during the month and chose the finalists. During the evaluation process, many factors were taken into account: whether the discussion contributes to a better understanding of human rights, whether it encourages analysis, and the practical value of the information provided. The quality of tasks, conclusions and the correspondence of the immersive approach to the age and other features of the audience were considered separately. Finally, 12 scripts have reached the finals, and will be published on our website shortly:

For the audience of the penitentiary system:
Inna Lazutina, The Right to Justice (film David and I)
Olena Udovytska, The Family Is The First Environment Where A Child Should Learn To Do Good… (film Raising Uliana)
Sviatoslav Foshchii, Political Status. Problems And Their Solutions (film No status. Ukraine)
For the student audience:
Alona Hlazkova, ​What Are Our Alternatives? (film Bully)
Alona Hlazkova, ​​Contemplation vs. Help? (film Liza, go home)
Romaniia Khula, Human Dignity is an Absolute Value (film Conversations on Serious Topics)

For the student audience:
Khrystyna Hataliak, TO Dignity Through Values ​​and Rights (films Counting Days and Years, Hotel 22, A sacrifice)
Yurii Chumak, On Rights And Law Enforcement For Teenagers (film Open lesson)
Nataliia Pasichnyk, Screening And Discussion Of The Film E-Wasteland (the film E-Wasteland)

For a wide range of spectators:
Anastasia Kliap, The Night Witch (film Night Witch)
Zhanna Lytvyna, The Screening Of Roman Bondarchuk's Film Roma Dream (film Roma Dream)
Zoia Filipenko, Active Citizens In Action (film Shut The Fuck Up)
We remind you that the finalist of the Competition will receive a free individual consultation worth up to UAH 1,000 from a selected, according to their own needs, human rights experts to expand their knowledge in the field and improve moderation skills. The moderators and finalists will also hold an online discussion of selected films based on their scripts at the Docudays UA online film club. The screenings' schedule will be agreed with the finalists separately. The audience will have the opportunity to evaluate the scripts and moderators as experts in legal education. These evaluations will be taken into account by the Competition Commission when selecting the winners. On 13 July 2020, the Competition Commission will announce 5 winners of the Competition, one in each category. The winners of the Competition: each author of the best script for educational events will receive a prize of UAH 3,000. All news
How to create your film club
If you wish to use the film-collection of Docudays UA International Human Rights Film Festival, we invite you to join the network of permanent Docudays UA educational film clubs on human rights
SUPPORTED BY