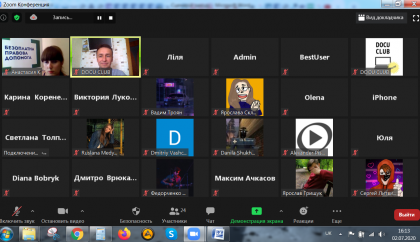 We continue to cover the DOCU/CLUB online events, which were held within the finals of the Competition for the best script for the educational events. The screenings and discussions were also held in the Docudays UA human rights documentary film club "THINK!". During the event, the audience had the opportunity to learn about the differences between the modern police and the former militsiya and write down the rules of correct communication with law enforcement representatives.

In 2012, Ukraine and Poland co-hosted the European Football Championship. Law enforcement officers were also actively preparing for this event. In particular, police officers learned basic English to communicate with foreign fans. The short documentary Open Lesson directed by Natalia Mashtaler shows not only the learning process but also the practical implementation of skills acquired by police.


Considering that teenagers often point out that they encounter law enforcement officers in public places, they were invited to watch the 2nd series of the animated film You and the Police by UMDPL Association and the Real Stories Production studio, devoted to the rules of communication with police on the street.


"One of the main tasks during discussions in the film club is critical thinking skills training. It is no coincidence that law enforcement work issues, as well as the communication between citizens and law enforcement officers, were discussed. Since 2008, I have been dealing with these issues in my professional life for more than ten years. I was the Assistant Minister of Internal Affairs to the human rights observance in the Kharkiv region. Currently, I am a board member of the UMDPL Association and the coordinator of the Sheriffs for New Communities project, which also cooperates with docu clubs," says Yurii Chumak, head of the Docudays UA film club "THINK!" and event moderator.


The event was created for a young, unprepared audience. The moderator already had experience of holding online screenings. This time, the audience came from different cities and towns: Lozova, Chuhuiv, Kharkiv. According to the event moderator, children and adult audiences are often wrong when answering the key question of the discussion: "Who gives us human rights?. Many believe that the state or the constitution grants us human rights. However, human rights begin at birth. State agents can both enforce and violate these rights.


An invited expert, Communicator of the Pervomaisky Local Center for the provision of legal aid, Anastasia Kushnir elaborated on the possible ways of protecting violated rights and legitimate interests provided by the centers and bureaus of the state system of free legal aid.

Summing up, the moderator of the event shared with teenagers three basic rules of interaction: do not provoke, do not be afraid, and do not run away. He also highlighted that ordinary people with their inherent positive and sometimes negative traits work in the police. Citizens who should know their rights and they are also responsible for interaction with law enforcement officials.


"You can consider yourself a law-abiding person and believe that law enforcement issues will not affect you. However, this attitude is wrong. There are many situations when this can happen. Someone may become a victim; someone may match the police sketch, ”said Yuriy.


Finally, Yuriy Chumak advised the film club’s moderators to avoid solo performance during online and offline events. And encourage participants to express their views and be fully involved in the dialogue.


Photo: a screenshot of the Docudays UA film club's online event “On rights and law enforcement for teenagers.”