Hero or anti-hero? Discussion after the movie in the film club at ZMINA. Human Rights Center. 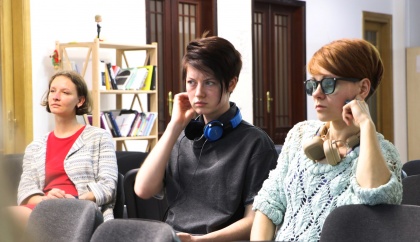 Discussion after the movie is one of the most interesting parts of the club life. This time the discussion turned out to be extremely lively, the audience voiced the opposite views, giving arguments. At the most acute moment, the discussion unfolded around the figure of the protagonist. On the one hand, most viewers have acknowledged that Gennady Mohnenko has taken on an important role in organizing an alternative rehabilitation center to be performed by the state and social services. For someone, he is a hero of his time, a man with a public mission, with endless authority and charisma, which, however, has negative consequences.

Critical thoughts were raised that Gennady's working methods were too radical, while the rehabilitation system and approaches had evolved tremendously. The audience suspected that it was important for the hero to have power over the children. He also noted that he did not understand that drug addiction was a disease and resorted to such unacceptable measures as removing a child from his family.

Alla Melnyk, invited expert, the head of the project "Street power", which helps teens from vulnerable groups, at the "Convictus Ukraine":

"The movie is extremely useful for discussing issues that affect the homeless. Very demonstrative story with different methods, approaches, with coverage of the work of both teens and adults. It addresses many topics: neglect, drug use, drug trafficking, family, parenting and child-rearing issues, public policy in these areas, and more.

If we take the period, which the film tells about, 2008-2009, the situation here is absolutely realistic. Everything has changed a lot now - even at the level of homeless children in Kyiv and Kyiv region. The police are working on this. These children are actively removed from the streets, they undergo rehabilitation in social and psychological rehabilitation centers, and social services work with their parents. Taking into account the drug situation, it has also changed since then: there is no injectable use among teenagers, and other types have spread. But the cases and the consequences are also very grave: these non-injectable drugs have a great impact on the mental state, as addiction is formed very quickly, even after the first consumption, a very strong desire for re-use. The discussion turned on the personality of the main character: his perception was very contradictory - he is a bright and ambiguous character.