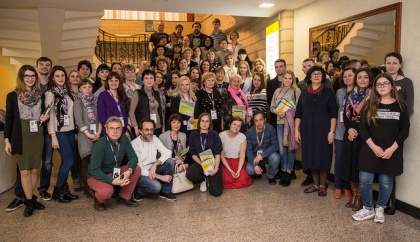 It is already a tradition that the program of International Human Rights Documentary Film Festival Docudays UA, which took place this year in Kyiv on March 24–31, includes a 2-day conference for the moderators of the Docudays UA film club network that now has more than 200 film clubs.

It is already a tradition that the program of International Human Rights Documentary Film Festival Docudays UA, which took place this year in Kyiv on March 24–31, includes a 2-day conference for the moderators of the Docudays UA film club network that now has more than 200 film clubs. The conference program involved a series of presentations of various projects which are useful for the development of film clubs, as well as lectures by experts and reports by film club moderators on their experience. In addition, the conference attendants participated in other educational human rights events, and watched and discussed Docudays UA films.

The first day of the conference started with speeches by Svitlana Smal, the chairwoman of the festival’s Organizational Committee, about the successes of the project and the future plans; by Oleh Duka, the director of the Bila Tserkva Center for In-service Training of Criminal Punishment Execution Service officials, about the film clubs in the educational institutions of the State Penitentiary Service; and a presentation of the Draft Declaration of Ethical Principles of the Nationwide Docudays UA Film Club Network, made by Oleksandr Stepanenko, the Docudays UA Traveling Festival coordinator in Ternopil region and a board member of the Ukrainian Helsinki Human Rights Union. 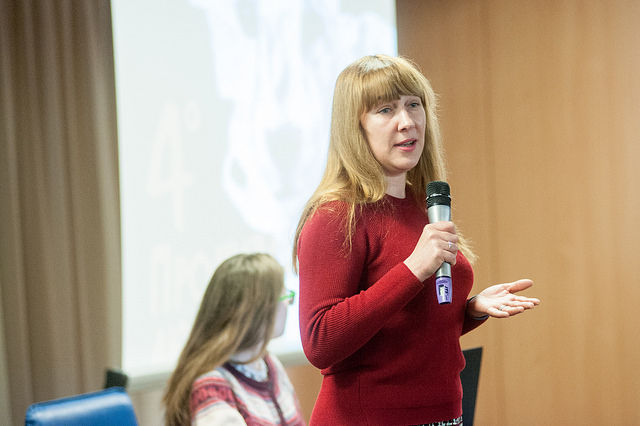 Svitlana Smal, the chairwoman of the Docudays UA Organizational Committee

The conference guest of honor was Igor Blaževič, the founder and director of one of the biggest human rights festivals in Europe, One World. “It is great that you screen films, but it is not enough. At film clubs, you can always do more, go beyond the limits of the usual formats,” said Blaževič. His speech on How to Create Your Own Audience Network, Based on the Experience of the One World Film Festival, served as an inspiration and a motivation to action for many participants. 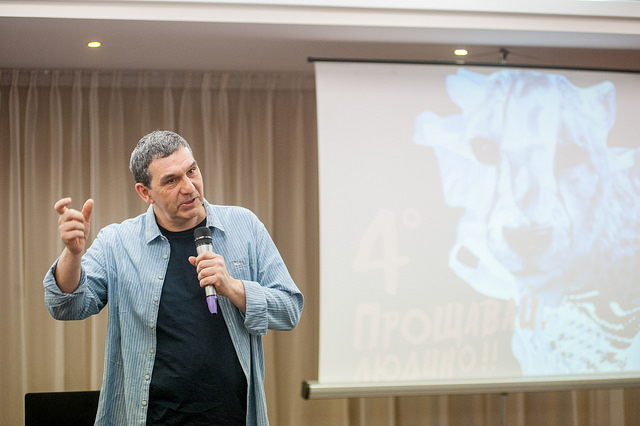 In addition, the participants listened to a series of short presentations of the projects which can, as partners, help to develop the film club movement or improve the personal professional level of the moderators. For example, Olena Ursu and Maryna Shpiker presented the results of the National Survey on Civic Awareness in Ukraine, carried out by the United Nations Development Program and Kyiv International Institute of Sociology; the results served as a basis for suggestions regarding methods to improve the level of civic awareness of Ukrainians by informal education.

Serhiy Burov, the coordinator of the nationwide Ukrainian educational program Understanding Human Rights (UHR) and of the educational branch of the Ukrainian Helsinki Human Rights Union, and the head of the Human Rights Education House in Chernihiv, talked about the opportunities which the UHR program can provide to film club moderators. 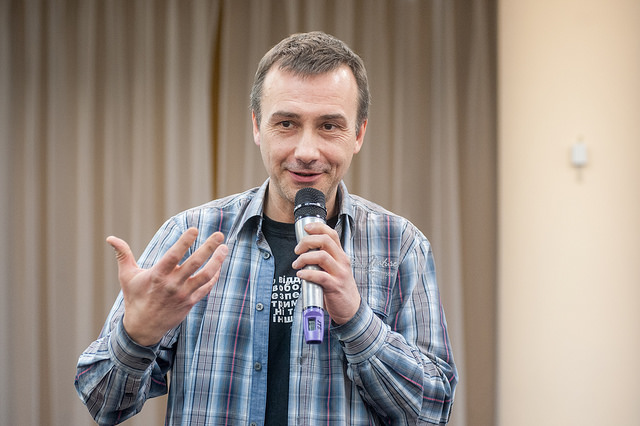 The media coordinator of the NGO Life, Oksana Totovytska, presented a video by the project Small Goals of Tobacco Giants. The video demonstrates the problem of concealed advertising of tobacco products that surrounds our children. Because of displays of cigarette packages in kiosk windows, tobacco brands become recognisable, and smoking is perceived as a social norm. The project initiators are trying to lobby for passing the anti-tobacco Bill 4030a, which will prohibit window display of cigarettes and protect children and teenagers from the impact of advertising in retail stores.

Natalia Bida and Oleksandra Sydorchenko, the organizers of the volunteer educational project #DontHitYourChild, presented a booklet What to Do if the Child Disobeys and Annoys Me? And How to Become Happy Parents of Happy Children? The booklet provides practical advice and sufficient knowledge from contemporary parenting books, explains conclusions of many scientific studies, and includes advice by professional psychologists. The booklet was created for free-of-charge distribution among parents, students, teachers, psychologists. All conference participants received a copy.

The first day of the conference ended with a speech by Oleksandra Matviychuk, the chairwoman of the board of the Center for Civic Freedoms and a coordinator of Euromaidan SOS, who talked about the opportunities for cooperation with human rights activists and the importance of involving these activists in film clubs to enable practical solutions for the discussed problems.

The second day was opened with a speech by Johanna Rohozinska, a representative of the National Endowment for Democracy (NED). The NED has supported the creation and development of Docudays UA film clubs for several years. Mrs. Rohozinska congratulated the participants and talked about the human rights component in the NED activities and its partnership with Docudays UA. 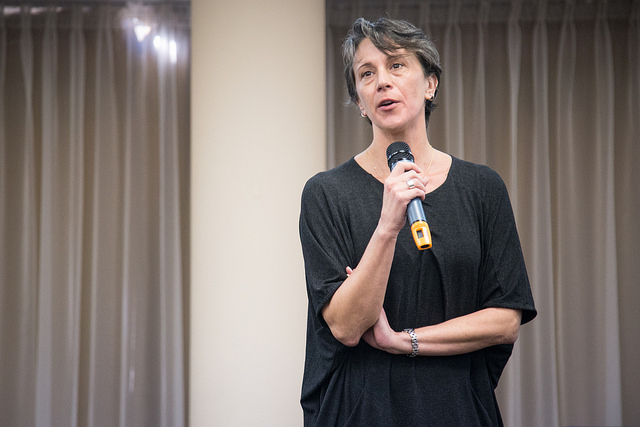 Johanna Rohozinska, a representative of the National Endowment for Democracy (NED)

Aksana Filipishyna, a representative of the Ukrainian Ombudsman Office and the director of the Department for Children’s Rights, Non-Discrimination and Gender Equality, introduced the audience to formal and informal forms of education for preventing and counteracting discrimination. 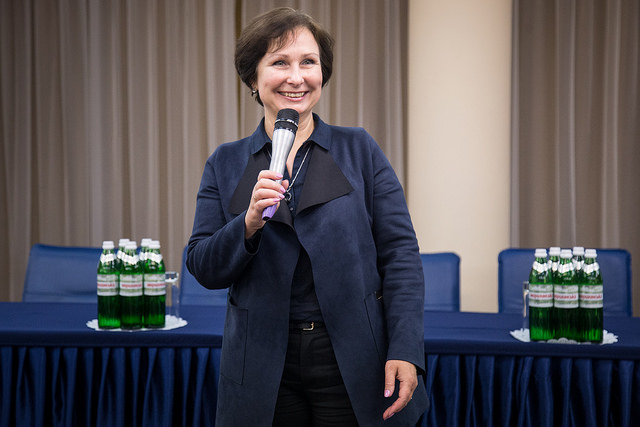 Aksana Filipishyna, a representative of the Ukrainian Ombudsman Office

The underlying topic of this year’s Docudays UA was the problem of climate change and environmental protection. In order to brief the conference participants on this set of problems, Olha Boyko, an environmental activist, a coach and facilitator in informal education and a media coordinator of CAN EECCA, gave a lecture titled Climate Change: What Is Happening? The conference participants learned what climate change is, what its consequences can be in Ukraine an globally, and about the ways to solve environmental problems.

Lesia Kharchenko, Viktoria Moshkina and Soldado Kowalisidi, representatives of Amnesty International, talked about human rights activism and the opportunities to participate in it, and presented the annual report on the situation with human rights in Ukraine and other countries.

The conference was concluded with a bloc of presentations by moderators who shared their experience, achievements and problems they had faced in their cities. 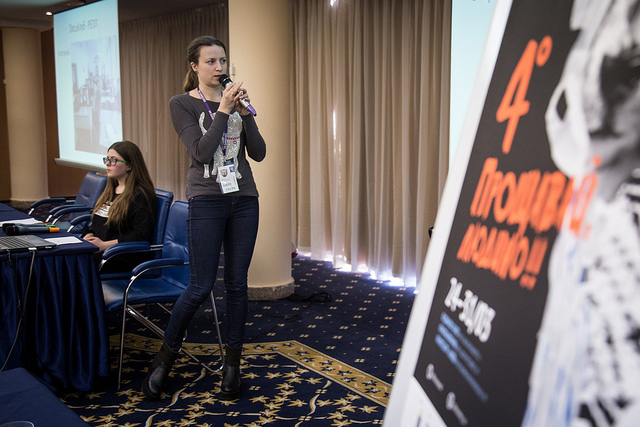 Maria Tsypiashchuk, the moderator of a Docudays UA film club "Human rights through the lens", Rivne

Exchanging and analysing experience, looking together for ways to develop — these processes are extremely important for ensuring the successful functioning of film clubs. Reviews by conference participants confirm this.

I would distinguish the three main pillars of the Docudays UA festival and conference; the first is excellent organization, clear sequence of events and meetings; the second is the selection of relevant human rights documentaries; and the third is presentations of various new projects, interesting, emotionally and informationally loaded communication with directors and participants of the Living Library. All three aspects together formed a harmonious, complementary and bright picture of the Docudays UA festival.

What impressed me the most, expanded my worldview and enriched my feelings were the festival films, both by Ukrainian and by foreign directors. I also appreciated new disks and teaching materials which we need in our work. I am sincerely grateful to all festival organizers and participants. You did enormous work which gave us priceless knowledge and experience, creative and sincere communication, and many positive emotions. 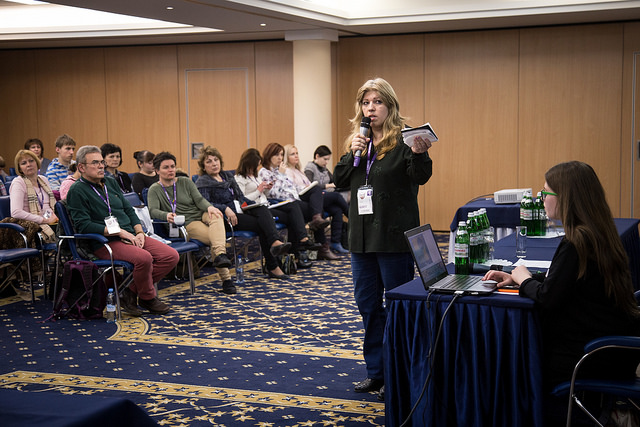 Natalia Chumak, the moderator of a Docudays UA film club at the Kremenchuk Educational Correctional Facility

I liked the conference very much. There was a lot of interesting information, communication with colleagues and festival guests. This year, we had an opportunity to watch films which touched our hearts and souls. After events like this, you gain momentum that encourages you to work more, inspires new ideas. You get a feeling that you are doing important work. I wish we could meet more often, at least twice a year, because we actually need it for productive work.

My brightest memory is Igor Blaževič. He is a very charismatic figure, and he gave me many ideas for my work. I also liked Olha Boyko’s environmental workshop. And, of course, my colleagues’ presentations. Thanks again for inviting me.

Natalia Dobrianska, the moderator of a Docudays UA film club at the Secondary School #48, Lviv:

I liked the conference, it was useful to listen to my colleagues, learn about their work experience. New acquaintances, new experience are always useful. The films I liked the most were I Am Not Your Negro and China’s Van Goghs. Thanks for inviting me. Such events give me enthusiasm to work. 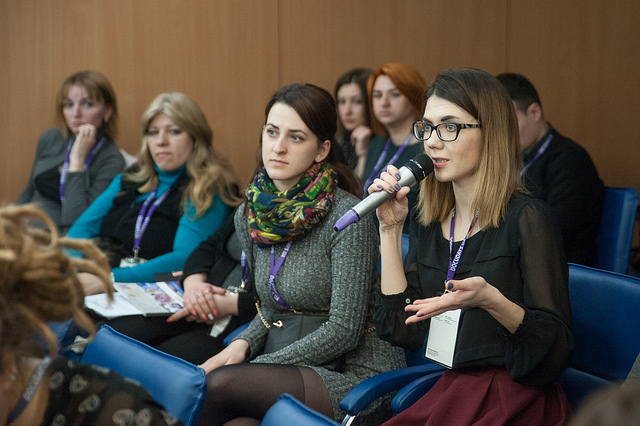 Antonina Koval, the moderator of a Docudays UA film club at the Central District Library in the town of Kryve Ozero, Mykolaiv region:

First of all, I am sincerely grateful for the opportunity to attend the film festival and for the conditions created for me. The program was intense and well thought-through, not a single irrelevant moment. We have already started to think how to organize cooperation with the projects Tobacco-Free Ukraine and the Center for Civic Freedoms.

It is great that film club moderators shared their experience. Please continue doing this in the future. 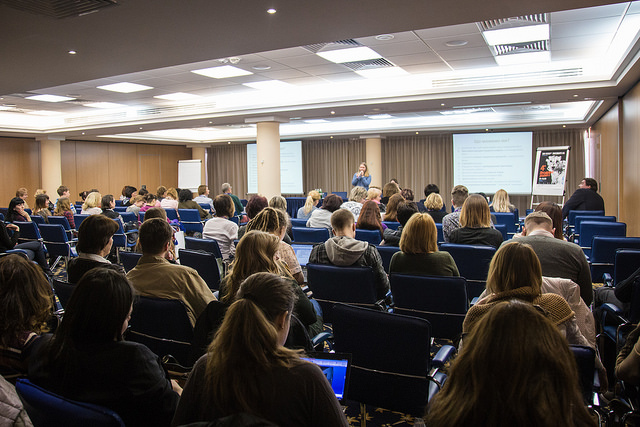 The event had impressive levels of organization, it was intense and, at the same time, it had very warm informal atmosphere. It was particularly interesting to meet and talk to Svitlana Smal, Oleksandr Stepanenko, Gennady Kofman. I learned a lot of interesting and effective information from Igor Blaževič, he is an extraordinary and charismatic figure whose speech inspired us to work. Serhiy Burov, Oleksandra Matviychuk, Lesia Kharchenko and Soldado Kowalisidi also made interesting presentations. I am especially grateful for the presentations by Docudays UA film club moderators; it was interesting not only to learn about their achievements, but also to discuss difficulties that emerge in the work process. I am very thankful for the meeting with Aksana Filipishyna and Oksana Totovytska, since many aspects of their presentation are relevant for my work. It was hard, in my opinion, to comprehend the very important and relevant topic of climate change, discussed by Olha Boyko, but the content of her speech was clear and conclusions were made.

The festival is excellent, I have never been to events like this before. Documentaries are all different, but some of them immediately provoked discussions with my colleagues. I liked meetings with directors, it was interesting to watch what happened immediately after screenings. I was moved by the films Dixie Land (I even cried), The Winter Garden’s Tale, Cabbage, Potatoes and Other Demons, Running In Closed Room. I am very grateful for the opportunity to participate in the conference and to attend the festival. My expectations were met, I met new people, and I implement the useful advice in my work.

I am especially thankful for the organization, the provided materials, for new documentary films, printed products, the photo report. Thank you for cooperation!