The Films for the International Day for the Elimination of Violence against Women. 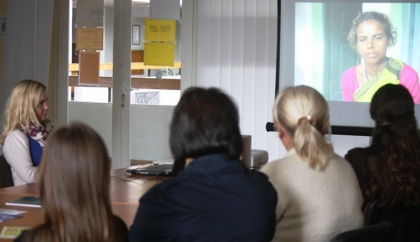 A series of human rights events, including the "16 Days Against Violence" campaign commence on November 25 and end on December 10. Docudays UA Film Clubs collection includes films that cover various aspects of human rights. Our selection is a small recommendation on films that might be useful for discussing violence.

In 1999, the UN Assembly has designated November 25 as the International Day for the Elimination of Violence against Women. This date is the day of the assassination of Mirabal sisters committed in 1960 under the dictatorship of Dominican governor Rafael Trujillo. In 2001, Ukraine first joined the "16 Days Against Violence" campaign. Since then, thematic initiatives and events have systematically brought together community organizations, government structures and a wide range of indifferent people.


Film club collections include a number of films for holding public events and thematic discussion after the screening. These include the film "ABC" by Estonian director Madli Lääne, which tells the story of a 17-year-old girl named Vele who goes to school with her daughter for the first time. Her adolescence was marked by the Civil War, so she was deprived of access to basic education. However, this is not the only reason: Vele is the victim of gender-based violence, rape. This type of violence is also an additional weapon of war widespread in conflict zones.


The film “Moriom” directed by Francesca Scalisi and Mark Olexa conveys the irreversible consequences of violence against the personality through convincing but delicate poetic visual language. Despite the local context, the story is based on, this problem remains universal and can be transferred to another context.


“Pink Saris” directed by Kim Longinotto is the film that will serve as a basis for discussion on economic violence against women. The 15-year-old Renu has been married off by her family but the husband left her. She is forced to leave her husband's home, but she also cannot return to her parents' home. The combination of economic factors and the burden of tradition leads the young girl being on the verge of suicide. However, issues related to gender-based physical violence is a theme that runs through the film.


At the state level, the problem of violence is not addressed on a systematic basis as far as Ukraine has not yet ratified the Istanbul Convention. It is worth remembering that violence has various manifestations: beating, sexual coercion or assault, psychological pressure (prohibition on working or having a personal life outside the family), persecution and harassment, sexual exploitation, genital mutilation, forced marriages.


Photo from the Reading Rooms Department of Olena Pchilka Volyn Regional Library blog, the screening, and discussion of “Pink Saris” by Kim Longinotto.