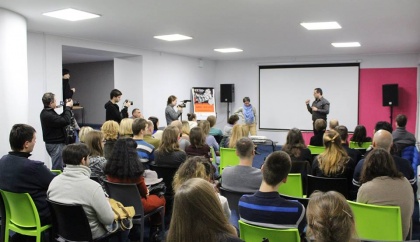 The film club moderators who organized the screenings of the Traveling Festival share their impressions and discuss the films they loved the most, which they would like to see included in the future film club collection.

The film club moderators who organized the screenings of the Traveling Festival share their impressions and discuss the films they loved the most, which they would like to see included in the future film club collection.

Pervert Park (dir. Frida Barkfors and Lasse Barkfors) is a film with a provocative title, which motivates serious reflection on the way social relationships function. When I saw it at a Traveling Docudays UA screening, I thought that it should definitely be screened again.

For me, the film became a guide to understanding the essence of rape culture in the contemporary society, and thanks to the discussions organized around it, we managed to see some opportunities to escape this vicious circle. During the discussion, two seemingly irreconcilable positions confronted each other: people who maintain that rapists should be harshly punished for indefinite terms — who, of course appealed to the unfailing argument, “What if it happened to your child?” — and people who, for whatever reason, were prepared to look at the problem of violence at the social (not personal) level. The discussion proved, once again, that hierarchy legalizes violence, and that rape culture easily reproduces itself in the society.

Personally I was deeply struck by the effectiveness of rehabilitation programs and support groups demonstrated in the film. Once people become outcasts, when they step on the road to reforming themselves, they should have a chance to be accepted and, of course, have access to the whole spectrum of human rights.

The film is difficult, analyzing it is not easy, but, as someone in the audience said, it is the kind of cinema that should definitely be screened and discussed to let our society develop in a humane way.

There is interest in documentary cinema in Bakhmut, and, importantly, the age of the audience here ranges from students to pensioners. Within the Traveling Docudays UA, we offered screenings of 4 films. The audience was the most interested in the films David & Me (dir. Ray Klonsky and Mark Lamy) and Of Men and War (dir. Laurent Bécue-Renard).

David & Me was very successful, and it would be great to include this particular film in the general film club collection to be viewed by various audiences. Upon requests from the public, we screened it twice for different audience groups. There were very lively discussions and a positive emotional effect.

The second place was taken by the film Of Men and War. It is a very relevant film for our realities, because of the war that is still going on, and because our country does not have institutions to deal with military servicemen’s rehabilitation. After watching the film, one of the viewers, a 10th grade high school student, said, “Now I have found the answer to the problem with my stepdad, who ‘shouts and fights’ at nights, and I was scared to be in the same house with this person. And now I will go home with full understanding of the problem which we should solve together with my family.”

Yosh, the moderator of the Docudays UA film club at the Lviv Palace of Arts

Quite often, Docudays UA films reflect reality which is not relevant for Ukraine, and discussions risk to fail because of the total lack of acceptance and complete disapproval by the audience. When we screened the film Approaching the Elephant (dir. Amanda Rose Wilder), I was afraid of this kind of response, that people will say, “This is not for us, not for our children.” My fear was backed by my experience of communicating with schoolchildren and their teachers. The authoritarian conditions in which the “prisoners,” excuse me, students of our schools find themselves often prevent them from expressing their opinions and making decisions by themselves, at least about extracurricular activities. But my fears were not confirmed, and the discussion was great, with shining eyes, hearts full of enthusiasm, and, of course, with a bit of sorrow over the enormous inert system of general education. It was interesting to involve in the discussion Tetiana Pylypets, a librarian and an activist, who has worked on creating alternative youth environments for 19 years, and who gives teenagers what they lack at school.

A human rights advocate and a professor Ruslan Topolevskyi, one of the discussion participants, noted that “Our schools were created as a result of the industrial revolution. A school where 1,000 people study is designed as a factory that produces children, future workers.” Approaching the Elephant inspired the audience to believe in different scenarios of events at school, because, in contrast to the general consensus about the harmfulness of the present Ukrainian system, we saw an alternative in this film, and we discussed the ways of its implementation using the means available to us.

Analysing this year’s Traveling Docudays UA film selection, I can say that the film club collection should definitely include the film David & Me. It shows both a personal story and a good case in point for the discussion of “fair justice” and its mistakes. The film says you can help others even if you are not a professional human rights advocate.

It may be a great decision to show two films at once, The Nest (dir. Kristína Schnirzová) and Happy Easter (dir. Svitlana Grigorenko). It would be an opportunity to consider two different answers to the same questions about communication between parents and children, and about what can be done when children’s choices differ from their parents’ choices.

Thanks to the Traveling Docudays UA, we have seen the stories of people who are ready to go to the world’s flashpoints to put an end to the ferocity of torture and merciless executions by state rulers. We sympathized with refugees who escaped death, famine and poverty, and listened to the arguments of the people who want to send them back. We met young people, a physicist and musicians, who are so passionate to communicate their enthusiasm to all people, but who wander around the world. We visited Ukrainian Carpathian meadows where we witnessed traditional craft which is disappearing. With wonder, we watched the experiment in children’s school education. With horror, we followed a girl named Alisa along the path of war in Eastern Ukraine. We visited Cuba, where we met Vladimir with Down syndrome and his mother Nelsa, an ill elderly woman. Will he now be able to look after his mother himself? In the story of their “abnormal” family, we see a much more “normal” relationship than in “ordinary” families...

All of these stories are still going on, we have watched only a small fraction of them, but the most important thing is that we now know about them. Stories showed by directors stop being lonely, closed, because now there are people who compare them to their own lives and who are able to help. And those who are very far away will be able to prevent similar stories from happening in their families, cities or countries.

Our short journey made us smile of joy and sympathise with bitter tears, and these experiences will, in the end, become our memories, integral parts of each of us.

Photo: Screening and discussion of the film Pervert Park at the Docudays UA film club at Queer Home, Kharkiv