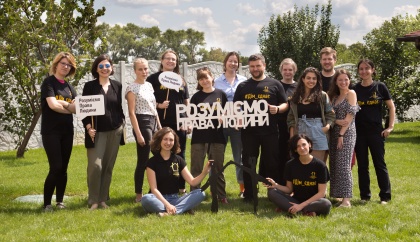 This year, participants of the Human Rights Educational Fest have been trying to figure out all the content highlights of human rights: how do these red lines that cannot be crossed? The event was divided into three blocks of three days and two working meetings. The theme of the first event was: “Human rights at school”. He was visited by participants in the educational process and human rights activists working on formal education. For this audience, Docudays UA's human rights department presented an all-Ukrainian campaign against cyberbullying. The second block was dedicated to “Successful Practices for Combating Torture in Detention Centers” and brought together experts working in this area. The third thematic race - "Human Rights in Law Enforcement Activities" - was also attended by representatives of Docudays UA film clubs.

During the third race, participants worked in two united groups on educational projects. The development included a thematic training on the protection of the suffrage of people with disabilities and those belonging to low-mobility groups. Other participants came up with the concept of training for children and adolescents on respect for human dignity. The process was moderated by Christina Gatalak, Docudays UA Film Club Head of the Second Lviv Local Center for Secondary Legal Aid.

Maria Tsypiashchuk, Head of the DOCU / CLUB "Human Rights through the Lens" in Rivne, a lawyer and coordinator of the UHHRU public reception, two years ago first participated in the Education Fest as a participant. But this year she already managed the volunteer service, coordinated the third thematic race of the Human Rights in Law Enforcement Festival, and also accumulated new knowledge and impressions for work and screenings:

“The opening speech by Arkady Bushchenko, written by the ZMINA Human Rights Center, was very powerful. It can generally be broken down into quotations and used in preparation for discussions and screenings. Listened to the presentation of the campaign against cyberbullying, as a lawyer, I was particularly interested to know the statistics in figures, how the judicial practice in this direction is developing, what trends are emerging. I was also impressed by Ruslana Burova's lecture - trainers in advocacy, human rights experts - who figuratively, in living examples, explained various aspects of the perception of human rights, which include a system of values, a philosophical concept, clear legal rules and mechanisms.

As part of the on-site screening of our film club and the second thematic race “Countering Torture in Detention Centers: Who and Why Torture, and How to Counteract It?” We watched the Prisoners tape from the film club collection. Although the event was quite late at 8pm, the discussion turned out to be intense. We learn about life in the Israeli Neve Tirz prison through a two-year history of cellmates, women, and prison security. Despite the film's personal focus, one in the audience said that they wanted to know more about the life stories of the three main characters - Jewish, Muslim, and Christian.

Also, it was no longer within the scope of the film club to show the film “Stage through the Half-Earths” about Kremlin political prisoners Oleg Sentsov and Alexander Kolchenko, moderated by Svetlana Bondar, communicator of the Human Rights Educational House in Chernihiv. Also included in the discussion was Maxim Butkevich, coordinator of the "No Borders" project, which since 2006 has been involved in providing assistance to refugees, internally displaced persons, asylum seekers, and is also an expert in xenophobia. It was fantastic because we learned many details about the lives of prisoners, their families, and the connection of their loved ones. Maxim highlighted the very clear focus of the political prisoner issue and described how each of us could join the support of Oleg, Alexander and many other prisoners, in particular by writing letters of support. ”


Photo - from the archive of the Educational Festival of Human Rights.