EXPERIENCE. THE IMPACT OF DOCUMENTARY FILM AND HUMAN RIGHTS AS AN ENVIRONMENT OF LIFE. 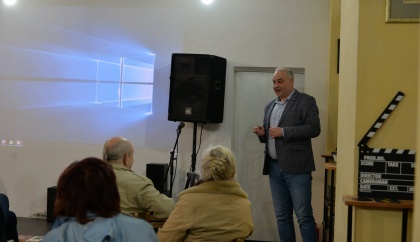 Ihor Garmash, Docudays UA Film Club director in Zaporozhye, shares his many years of experience and strategies in the cultural field.
Beginning.

Our movie club is called "The Ascent", it is almost 43 years old. It is a cultural institution in Zaporozhye. Cooperation with Docudays UA began, I think, ten years ago, within the framework of the Wandering Festival, when a well-known public figure Olga Vesnyanka recommended that I contact Gennady Kofman. Later, we opened Docudays UA Film Club. In general, when we started, it was easier for us because we already had a basic audience. If not only the events of Docudays UA, I have managed to organize about seven hundred shows during these ten years of work.

Earlier, seven or eight years ago, during Yanukovych's time, there were problems with the police during film screenings and discussions (there was no police at that time). The authorities were wary of human rights issues. It was believed that the state should control such things. But since Yanukovych escaped from Ukraine such problems do not arise.

Approaches to Audience and Human Rights as a Balance of Life.

People are not always ready to discuss topics related to the LGBT community because there are some stereotypes that have been around since the Soviet era. In Zaporizhzhia, a large part of the population is Russian-speaking, so the language issue also causes aggressive reactions. However, we often involve psychologists who try to delicately direct any exacerbations during the discussion into a constructive direction. In order to reach a more or less unified position at the end of the discussion, despite polarized thoughts. I cannot say that these situations occur at every revision, but quite often, and in general, our job is to be prepared for them.

I get inspired by the situation when people start to dive into the process. At first, they watch the movie a little apart. But there is a turning point in the discussion, and people start trying on themselves. They understand that this is happening not only somewhere in another country or in another layer of society, but also with them. We are already discussing how these problems or issues can be solved. And in general, this is a key point in our activities.

It is important for us that the moderator or the expert involved not only be professionals in their field on the relevant topic of the show, but also understand what human rights are. Moreover, it must be their own worth. That is, if their whole life is imbued with the concept of human rights, then any event will be constructive. There is such a rather delusional word as "ecology". Ecology is perceived as having something to do with air or water, nature. But life can also be eco-friendly. Living Green means knowing your rights, exercising them without violating other people's rights. This is a very subtle thing: when I am able to live freely, enjoying life, but in doing so, I am clearly in control so as not to violate or oppress other people's rights. That's the balance.


Collaborations, communication and broadening of the audience.

We also do cross-sectoral collaborations. For example, with the literary and artistic festival "Zaporozhye Book Fiction", which attracts more than ten thousand visitors. We do a separate location there and show Docudays UA movies. Usually 200-300 artists from all over Ukraine and from the world come to this festival, so we invite some of them to watch the film and talk to people. It will be interesting to discuss the tape after the show, say, with writer Lubko Deresh.

In our mature audience, we notice the genesis, some shifts in the perception of human rights. We have quite a few Russian-speaking and nostalgic people of the Soviet era, especially the older ones. Of course, through our activities we try to reach their mind and heart as much as possible. Often nobody works with a "TV audience" that receives information from low-profile news reports. When you start communicating with them through more serious constructs such as documentaries, discussing specific paragraphs of the Declaration of Human Rights, people begin to reflect and change their outlook.

We attract a new audience depending on the specifics. The younger sector is reached through universities or places where youth gatherings are locally gathered. We seek out older audiences in public places. These may be simple newsletters or stop announcements. 50-60+ people are attentive and usually read the printed text. Free play is an additional role in attracting this category of viewers and viewers. In our country, unfortunately, the closer to retirement age, the less money there is.

Beginner tips and the impact of documentary.

As I am still an experienced trainer in the cultural field, I discuss similar things with many who go into the industry. The first thing to understand is: why are you doing something? Why do you register for a film club? If a person just loves movies, this is clearly not enough. We need to evaluate our capabilities or the need to develop a bunch of skills: organizational, business, moderator, communication. We'll have to constantly negotiate and find a whole lot of compromises with other organizers in order to make cool shows. All this will be fun too, but we need to work on it. However, if the process is “by force” then it should not be undertaken.

I am convinced that discussion through documentary is the best method. Social problems can also be spoken in the language of contemporary art: through painting, installations, flash mobs. But all of these things, unlike classical art, have a rapid impact that is just as quickly forgotten. Fundamentally, you can still influence through books, but not many people spend time reading. For example, if you walk down the street and ask, "Have you read Timothy Snyder's books?" I'm afraid there will be few positive answers. But watching a movie that lasts from 20 to 60 minutes and just talking about it can be everyone. Therefore, it is the surest way to influence a person.

As for me, the movie "Vote for me, please" is, in a sense, universal. He is very close to any audience in our post-Soviet society. In our reality, we are constantly faced with some electoral manipulation. In my opinion, this movie is also perfect for getting started with a newly opened movie club. In my observations, people usually remember this movie for a long time. And they have been working with him for quite a while, thinking about issues of responsibility, conscience and coexistence with others. And when adults watch the movie "Vote For Me, Please" about Chinese schoolchildren who decide to choose an elder in their class, they begin to realize that they are playing the same game when choosing a president or a deputy. Only, unfortunately, its consequences are much more serious: for example, thirteen thousand killed on our front. It is also the result of a certain infantile nature of people who cannot evaluate their actions. But it is in such easy messages that one can make one think and be more responsible for the fate of our country. All news
How to create your film club
If you wish to use the film-collection of Docudays UA International Human Rights Film Festival, we invite you to join the network of permanent Docudays UA educational film clubs on human rights
SUPPORTED BY