FINALISTS OF THE CONTEST FOR THE BEST IMPACT CLUB 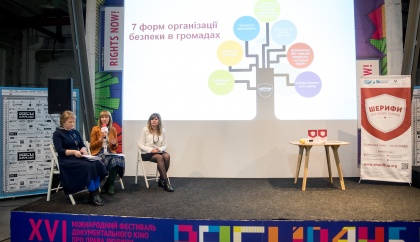 In July, the Department of Development of the Docudays UA Network announced a contest for the best impact club among permanent DOCU/CLUBs. All platforms in the Network which started working at least a year ago were invited to participate.

We have long known that Docudays UA work as laboratories for change; and thanks to this year’s contest, we studied how exactly dialogue with the audience about human rights is established in the DOCU/CLUB network, how community members are engaged in advocacy campaigns, promotion and support for democratic reforms. The jury, which involved representatives of the Docudays UA International Human Rights Documentary Film Festival and human rights experts, has determined twelve finalists in each category. All finalist film clubs will receive certificates for 1,000 UAH each to purchase equipment required for the film clubs’ work.


Film clubs at State Penitentiary Service of Ukraine facilities which work with the staff and with individuals who are temporarily held at the facilities:


As a reminder, we will announce the names of the four winners of the contest for the best impact club already on 14 September. The contest winners will receive certificates for 5,000 UAH each to purchase equipment required for the work of the film clubs.


Main photo: A roundtable about the topic of one of the impact campaigns, Sheriffs for New Communities, at the Docudays UA Documentary Film Festival in 2019, IZONE space, Kyiv, Ukraine; Mykyta Yurieniev.