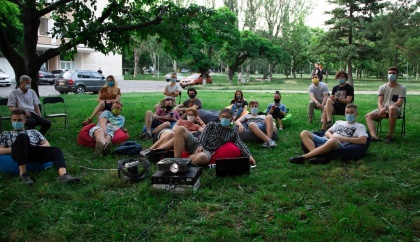 Even though the screenings of the films from new collections are already being held, the films from previous collections still attract audiences, provoke discussions, and bring up harsh issues of nowadays, which often do not have unambiguous answers. Read our traditional fresh selection of feedback from the audience and experts from online and offline screenings.


"Before the screening, I asked the audience to remember the international document's name, which enshrines the child's basic rights. Together, we have found that rights are an integral part of life, but sometimes rights are violated, so it is important not only to know where to find the help but also who protects us, who is the "shield" of our rights? Participants received paper shields on which they had to write who or which institution/organization could stand up for the child's rights. Teenagers focused primarily on social services and centers, the police, and the judicial institutions, but for some reason they forgot about adults: parents, health and education workers.


During the film's discussion, the audience tried to find out which "shield" can protect the main character? After all, in the girl's family's current situation, parents and relatives cannot protect her. For a long time, the audience discussed what Lisa's done. They considered whether running away from home was a protest, a way to attract the mother's attention, or survival instinct as responce to a dangerous environment at home. At the end of the discussion, the participants came up with a strange idea to compare Lisa with a snail. However, the snail is in a better position because it can hide in its house in case of danger. The girl does not have such an opportunity and runs away from home all the time. "


"The film is very relevant. We, parents, should know that children are not born "difficult", they become "difficult" when various factors influence them. In general, the word"difficult" describes the very common situation in our country nowadays. The number of orphans with living parents is growing. The family failed to create suitable conditions for life and harmonious development to Vasya, the protagonist of the film. The guy becomes lonely and runs away from reality because there is no family warmth, kindness, and love. On the other hand, imperfect legislation, non-compliance with human rights appear to be a problem of more than one country. People want to breathe freedom and justice, and this should become an unquestionable and unconditional guarantee of human life anywhere. "

Docudays UA Film Club "Human Rights through the Lens", Rivne. Screening of the film This is my land, audience feedback:


"Honestly, the film was not easy to watch. I'll be honest: during the first 10 minutes I had the feeling that I wanted to quit watching because of some things I couldn’t understand, but then I didn't even notice when the film had ended. After the screening, I had an ambiguous feeling and many questions about the problem in the region. As a descendant of Jews, I have always been on their side, but now I understand that my worldview will no longer be the same as before. Quarrels and conflicts between the two nations are not only their common tragedy: stereotypes are so ingrained in the memory of the citizens of the two states that a ceasefire and the beginning of peace negotiations to find a compromise seems impossible! The discussion that followed the screening made me open my eyes to the problem and realize how powerful propaganda can be."


"The film impressed me because I never pondered about Israel’s and Palestine's situation, so not all the moments in the film were clear for me. However, what struck me most was how the history of relations between Palestine and Israel is presented in these countries. It seems to me that this situation resonates with ours. After all, in the history of Ukraine, information was often distorted by the ruling elite. Tamara Erde's film illustrates how easy it is to control a nation when one knows how to control information. In this context, the phrase "who owns the information, he owns the world" makes you think and learn.

Photo: open-air screening of the film club Kultprozhektor, Zaporizhzhia. All news
How to create your film club
If you wish to use the film-collection of Docudays UA International Human Rights Film Festival, we invite you to join the network of permanent Docudays UA educational film clubs on human rights
SUPPORTED BY